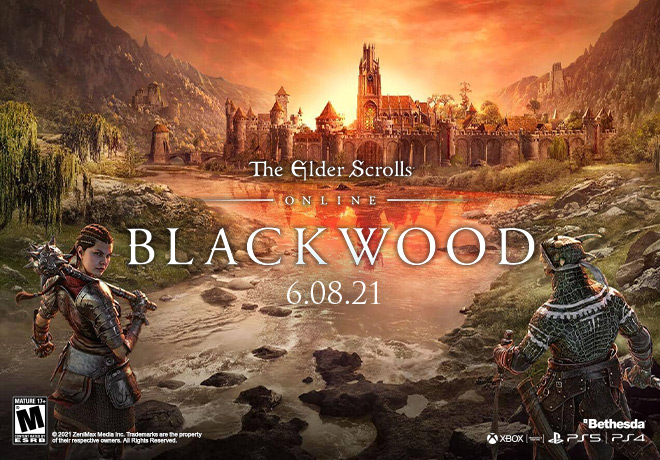 GATES OF OBLIVION
Uncover the schemes of the Daedric Prince Mehrunes Dagon 800 years before the events of The Elder Scrolls IV in Gates of Oblivion, a new year-long adventure for The Elder Scrolls Online. In the upcoming Blackwood Chapter, you can continue the saga that begins with the Flames of Ambition DLC and investigate a conspiracy where all paths lead to the Deadlands.

DISCOVER BLACKWOOD
From walls of the Imperial city of Leyawiin, first featured in The Elder Scrolls IV: Oblivion, to the murky bogs of Shadowfen, explore the mysterious region of Blackwood and uncover the Daedric plot at its heart.

FIND NEW ALLIES
Never adventure alone again. Choose a Companion to fight alongside you, keep you company, and tell new stories as you grow your friendships with all-new and unique characters ready to aid you in your quests.

A NEW TRIAL: ROCKGROVE
Retake the village of Rockgrove from Daedric-worshipping Argonians in a new 12-player Trial. Battle through the town and put a stop to the invading tribe's rituals before they can call forth Mehrune Dagon's great army.

NEW WORLD EVENTS: OBLIVION PORTALS
Enter the Oblivion Portals, scattered throughout the region of Blackwood, fight your way to their heart, and shut down these mysterious Daedric constructs, lest they engulf all of Tamriel in flame.